This post may contain affiliate links, which means I’ll receive a commission if you purchase through my links, at no extra cost to you. Please read full disclosure for more information. 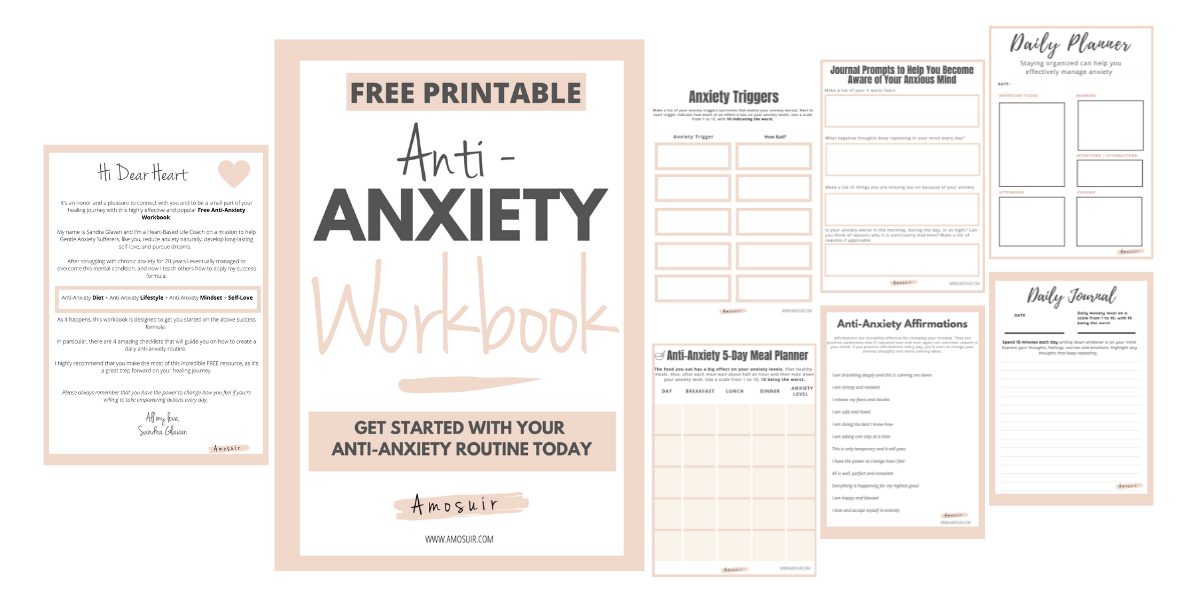 Chamomile is often consumed in the form of tea and is thought to be a calming drink that aids sleep.

According to research there is strong evidence to support that chamomile and anxiety are a good combination.

On top of that chamomile tea is caffeine-free which is an important factor as caffeine can significantly raise anxiety levels.

I drank chamomile tea daily while trying to get my Generalized Anxiety Disorder under control, and in my experience it is the number 1 anti-anxiety drink!

If you’re looking for a soothing and tasty anti-anxiety drink or a natural supplement for anxiety in this article, you’ll learn how chamomile helps to relieve anxiety and how to take it.

What is Chamomile Tea?

Chamomile is a flower, and member of the beautiful daisy family (Asteraceae)
Chamomile is one of the most ancient medicinal herbs known to mankind and its use in human medicine dates back to ancient Egyptian, Roman, and Greek times. It remains one of the most popular medicinal plants around the world even today.
There are several varieties of chamomile but the two most frequently used in herbal medicine are

German chamomile flowers have the highest concentration of beneficial compounds and nutrients, and is the more popular variety, though Roman chamomile is still widely used in some countries.

It’s estimated that 1 million cups of chamomile tea are consumed across the world daily!

The Science Behind Chamomile and Anxiety

The effects of chamomile on anxiety relief has been under scientific investigation since the 1980s.

More recently human studies have been conducted and there is growing evidence that chamomile is an effective natural treatment for anxiety disorders.

In 2009, one study looked at the use of chamomile extract for mild to moderate Generalized Anxiety Disorder (GAD).

After 8 weeks they found a significant reduction in anxiety symptoms and improvements in overall feelings of wellbeing among the chamomile group. Chamomile was well tolerated with more adverse reactions reported by people taking the placebo.

The demonstration of chamomile’s efficacy and tolerability in patients with milder GAD may provide a wider acceptability of anxiolytic treatment in the general medical community. Despite the limitations of this initial study, the present findings suggest that chamomile may possess modest anxiolytic effect in some patients with mild GAD.

Another study, in 2016, went a step further and looked at the effects of taking chamomile extract for a longer period of time. The researchers gave chamomile extract to 179 patients diagnosed with moderate to severe GAD.

For the first 12 weeks, all patients took 1500 mg of chamomile extract every day. After that, for the next 26 weeks, half of the participants continued with chamomile extract, while the other half were given a placebo.

The results of the study were very positive. Participants experienced an improvement in their anxiety. The group that took chamomile extract for the full 38 weeks went on for longer before experiencing a relapse.

A larger dose of 1500 mg appeared to be safe and there were no negative side effects on libido as is often the case with some anxiety medication. Patients also showed improved blood pressure.

How Chamomile Helps to Relieve Anxiety?

Studies on animals showed that chemicals naturally present in chamomile act like common drugs for anxiety, reliving anxiety symptoms but without the same side effects.

Anxiety is often linked to inflammation and low levels of antioxidants in the body.

Antioxidants are substances that help to prevent or slow damage to cells.

Chamomile can help to counteract both problems.

It contains various plant antioxidants including flavonoids, terpenoids, and phenolic compounds, and it’s also anti-inflammatory, as well as antimicrobial.

The flavonoid compound in chamomile, called apigenin, promotes relaxation. It binds to benzodiazepine receptors in the brain, which then has a sedative effect.

Chamomile’s flavonoid also helps to boost mood with its anti-depressive properties. It stimulates the production of happy chemicals including dopamine, and serotonin.

Anxiety and poor sleep quality often coincide, while one of the most common uses of chamomile is as an overall sleep aid.

Drinking chamomile tea is particularly beneficial for those suffering from sleep apnea and restless sleep.

Anxiety and stress activate the fight-or-flight response, which can affect your digestive system. It can cause your esophagus to go into spasms and increase the acid in your stomach, resulting in indigestion.

Chamomile tea acts as a natural diuretic, helping to flush out water and waste from the body. This boosts overall digestion and prevents bloating.

Also, its anti-inflammatory properties help to relax the gut and allow for smoother bowel movements.

How to Take Chamomile for Anxiety?

Chamomile is one of the safest herbs you can ingest or apply.

The following doses are recommended for adults:

Always read the product label for dosing instructions. Increase your dose towards the upper limit to relieve anxiety symptoms.

I used to drink 4-5 cups of chamomile tea a day to manage my anxiety.

I usually had my first cup first thing in the morning, another one at around 11:00, the third one at 16:00, and the last one before bedtime.

If I had really bad anxiety days then I would have the fifth cup at a time when I needed it the most.

More studies have looked at the effects of chamomile extracts on anxiety because extracts are more practical for clinical trials. The researchers can manage the dose more effectively, increasing, or decreasing as needed.

Chamomile extracts can refer to capsules, tinctures, or liquid extracts.

But how you choose to consume chamomile is entirely up to you.

Any good quality chamomile tea or chamomile supplement can be effective.

Just make sure that you read the instructions on the packaging and stick to the dosage guidelines.

When buying chamomile tea, tincture, extract, or capsules choose organic if possible and avoid products with additives, preservatives, and other synthetic ingredients.

I personally love chamomile tea so for me, the best option is to drink it.

Organic Chamomile (Matricaria Recutita) Dried Flower
100% Natural Extract Tincture with No Artificial Colors or Flavors. Made and Tested inm the USA, and carefully crafted from a potent source. Buy on Amazon

TerraVita is hallmarked by the highest possible standards of purity, potency, stability and freshness.  Buy on Amazon

Who Should Not Consume Chamomile?

Chamomile is not recommended if you are

How to Make Chamomile Tea?

For maximum health benefits, it is best to consume loose dried chamomile flowers rather than chamomile tea bags. Also, as mentioned above buy organic flowers if possible.

Chamomile tea bags can contain caffeine and other cheaper tea varieties and as such are best avoided.

Final Thoughts on Chamomile and Anxiety

Chamomile tea is one of the best anti-anxiety drinks.

Combine your chamomile tea or supplements with an anti-anxiety-diet to effectively manage your anxiety through food.

I'm a Heart-Based Life Coach for Gentle Anxiety Sufferers. After two decades of chronic anxiety and self-hate, I managed to conquer both, and experience a huge spiritual transformation in the process. This incredible journey inspired me to pursue my dreams and help other gentle anxiety sufferers. I’m not a mental health professional, but I’m someone who has studied intensively about anxiety and achieved success with everything I learned. If you’re a gentle soul who is struggling with anxiety and would like my help, I’d love to coach you. Check out my free and paid coaching services.